only Arabica coffee is grown in Nicaragua. The production area occupying more than 100 thousand hectares takes place primarily in the northern and central areas of the mountains.

The highest plantations (600-1500 m) of the Central American countries may be found here, for which the tropical climate and volcanic soil is favorable. So, the Nicaraguan coffee is of good quality, with distinctive, fruity aromas.

In spite of the excellent environmental conditions, the coffee came to Nicaragua relatively late, in the second half of the nineteenth century. The newcomer spreaded quite fastly; the government offered a reward of five cents for the planting of each coffee shrub, thus encouraging the establishment of plantations.

One hundred years later, in 1992, they have planted more coffee than any other crop. The coffee recompensed the confidence invested in it and contributed significantly to the economic and environmental development of the country. However, the road to success was very long.

The economic growth was followed by a devastating earthquake, authoritarian regimes, insurrections, the Cold War and the Civil War. The coffee industry barely managed to survive this series of misfortunes, it soon faced another difficulty: in 1998, a hurricane destroyed the coffee plantations ensuring the livelihoods of tens of thousands of farmers and roads required for the transportation of crops.

The next disaster was the coffee crisis in 1999-2003, which, together with frequent droughts put an end to the rise of coffee industry. Coffee prices have sunk so low that even the harvest was loss-making, so the fruits were not harvested. The farmers had no money for the maintenance of their lands and their children’s education, so they mostly emigrated or lived by social assistance.

Thanks to the land reform fought out by the trade unions, finally thousands of families obtained plantations again. The co-operatives began to organize themselves to adapt more easily to the new demands of coffee.

It also represents their economic and political interests at national and international level both. 95% of the workers are working at the 45-thousand small, micro and small enterprises who produce high quality specialty coffees.

In the eighties, the organic coffee culture of Fair Trade began to spread in Nicaragua. A growing emphasis was put on infrastructure development, quality assurance programs, vocational training, scholarships, environmental projects and the boosting of agro-eco-tourism within the framework of export-oriented small farmers’ organizations.

The transportation of the coffee became to grow faster due to the continuous development of infrastructure, so the coffee quality also improved.

Coffee is Nicaragua’s main export, which provided approximately $ 200 million in revenue annually and created more than 280 thousand jobs, which is a considerable achievement in a country of six million people struggling with a nearly 50% unemployment.

Cultivation in the shade

The vast majority of Nicaraguan coffee is cultivated in the shade (95%) of trees. This results in a tastier, sweeter coffee, whereas the fruits grow slower in the shadow, while it’s natural sugar content remains higher.

On the other hand, the coffee will also be healthier, because the plant may grow up in it’s natural environment, in an organic way (without the need of a fertilizer). The family-run businesses plant the coffee in the shade of different exotic, indigenous tree species -such as avocado or orange- to preserve forests and maintain biodiversity.

The coffee compensates the persistent efforts by Nicaraguan coffee growers by creating jobs and high-quality exportable products, the protection and sustainable management of soil and water and the promoting of wildlife.

The front of the café has big wide brown benches and tables that can seat a lot of people. The interior of the the building isn’t as cowboy looking as the exterior but it certainly bears some elements such as a bunch of cows at every corner of the venue. The non cow part of the interior is modern and comfortable.

The coffee that the Cow’s end café offers is just magnificent. We can write a novel about it, but we will try to keep it light and informative. You can take all their coffee drinks to go and they come in three different sizes medium, large and extra large. They offer the regular coffee with one free refill, café au lat which is, as you probably know, coffee with steamed milk. We can also recommend Mocha au lat and white mocha. 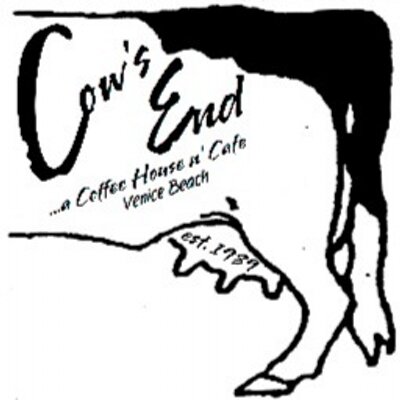 The espresso drinks come in two sizes and you can also take them to go. The sizes are called single and double. Out of these we can recommend macchiato which is marvelous, espresso con panna and espresso fresco. We are well aware that you can’t try them all but you might as well take a shot or a shooter which is their mix of darkest roast coffee with a shot of espresso.

You should also try the cappuccino with or without the cream, and of course the americano. A lot of the coffees also come in an iced version, if you are in the need for the summer refreshments, and LA does tend to get hot!

As for the other drinks, we can recommend their smoothies which you can drink flat or add some nutritional supplements such as vitamins and proteins various antioxidants etc. You should also try the freshly squeezed juice mixes which will fill you up with vitamins essential for the body.

We mustn’t forget the food of course. The bagels to start with are to die for. They come in all possible variations and mixes of sweet and the savory. Anything mixed with eggs is great for the breakfast but it is served all day so if you feel like eating an omelette in the afternoon feel free to order it at the Cow’s end café. They also offer very affordable and healthy salads like the Tuscan salad or the pesto Caesar salad.

And if your best dog friend is making your company, you can buy him a treat – doggy bones.

All in all we found the cow’s end café to be one of the most amusing cafes in LA because of its sassy look and a very well made menu. You should definitely drop by and try anything we mentioned, because we can guarantee you won’t be disappointed, on the contrary you will be greeted by the always smiling staff which are even now ready to take your order!

The original and the best (Caffe Reggio)

In places like New York cafés are not only there for you to grab a cup of coffee and go, they are

social, there for you to express and create, and to connect with people you’ve never met before.

Although New York is filled with extraordinary cafés only a few of them stand out for their quality,

history, and looks. a prime example of those qualities is café Reggio in New York.

Famous for introducing the first cappuccino to America, café Reggio was founded by barber

Domenico Parisi, who came up with the idea of importing the first espresso machine to the United

States in 1927 to serve his customers while they waited, by that creating “the original cappuccino

bar”. That same machine is still on show in the café symbolizing the cafe's rich history as pioneers of

The original cappuccino machine was made in 1902, which inevitably means that it is no longer being

used, but that does not mean that their coffees have lost their sweet and aromatic taste, and that

flavoured syrup and that espresso beans should always be well roasted but not burned . The café is

from their strong drinks like macchiatos to hazelnut cappuccinos.

Standing for 92 years, the café still looks almost like it did in the 1920s. Looking around the café as

you sip an “Original Cappuccino”, you will notice a beautiful array of artwork, some of which dates

back to the Italian Renaissance period. The café itself is surrounded by art all around, from the

-why you should visit-

taste of freshly baked Italian pastries and a nice cup of coffee ,While also being surrounded by


Always be with us